The Monsignors – Msgr. H. A. Drouilhet

A life spanning more than a half-century of service to Catholics in Jefferson County ended August 16,1988, with the death of Monsignor Drouilhet.

Monsignor Drouilhet, a native of Galveston, celebrated the sixtieth anniversary of his ordination to the priesthood in March 1988. His priestly ministry spanned two dioceses, Galveston-Houston and Beaumont, three Port Arthur parishes, St. Mary, St Catherine of Sienna, and St. James, and many positions.

During his lifetime, he received recognition from the community for his work

with youth, especially with the Boy Scouts of America and with juvenile authorities. He earned a bachelor’s degree in government from the Rice Institute (now Rice University) in Houston. He was the first Rice graduate ordained to the priesthood.

He was ordained on March 24,1928 in Rome, Italy, for the Galveston Diocese after completing his theological studies at North American College in Rome. While there, he earned a licentiate in Sacred Theology. After ordination and his return to the United States, he was assigned to teach graduate moral theology and church history and to serve as treasurer and principal of the high school department at St. Mary Seminary in La Porte. He was the first designated director of vocations for the Galveston diocese.

He moved into parish ministry in 1940 when he was named administrator of St. Mary Church, Port Arthur, where he served for thirty years. He was named its pastor in 1941. In addition to his duties at St. Mary, Monsignor Drouilhet served as Chaplain to the Sabine Pass Coast Guard Station During World War II, the local National Guard, the Elks Club, and on civic boards, such as the Red Cross and Urban Renewal. He also served as chaplain to the Santa Maria Knights of Columbus and as Faithful Friar of the Fourth Degree Knights.

Monsignor Drouilhet served as vicar general from 1966 to 1977. He was elected to serve as administrator of Bishop Vincent M. Harris, the first bishop of Beaumont, and Bishop Warren L. Boudreaux, Bishop Harris’s successor. He was reappointed consultor in 1969, 1972, and 1976.

He remained active in full-time priestly ministry until he was hospitalized August1, 1988. He taught at Bishop Byrne High School religious education program, served as chaplain to the Beaumont Serra Club, and as financial advisor to Bishop Ganter. Monsignor Drouilhet is believed to be the first priest in the area to be involved in the media when he led a “live” Rosary daily on a local radio station in the 1940s. His reputation as a financial manager developed early in his career. While at St. Mary Seminary, he would go to different parishes to preach asking for financial support for the seminary. While pastor of St. Catherine, the parish department was reduced and a new parish hall was constructed. His goal as pastor of St. James was to eliminate the parish department within two years. He achieved that goal in ten months.

“I saw him as a friend and one I could go to when I needed advice or guidance,” Father Martin Bordages said. His love for the Eucharist and Mary was shown in his prayers and rosary before the Blessed Sacrament. He always had time to help people. Local probation departments often sent him youth to help out and to talk to. 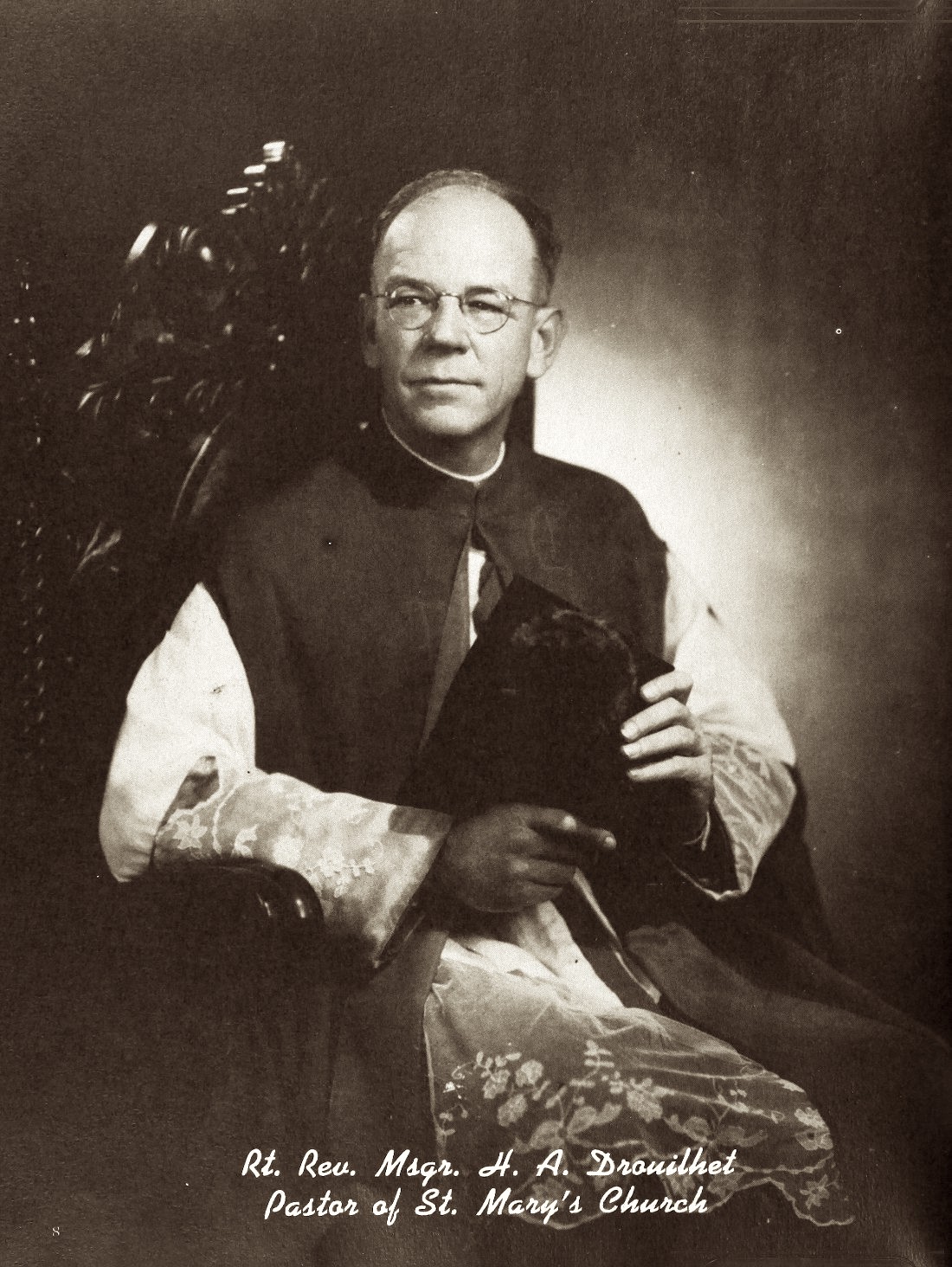