Monsignor James Kirwin was the founding pastor of St. James Church, Port Arthur, where he remained for forty-one years. He was known and loved by Catholic and Protestant alike as “Father Jim.”

Born in Circleville, Ohio, July 1, 1897, he received his early education at St. Joseph parochial school there. He came to Texas in September 1912 to study at St. Mary Seminary in La Porte. He was ordained to the priesthood June 15, 1921, by Bishop Byrne.

Father Kirwin celebrated his first Mass June 19, 1921, at St. Joseph Church, Circleville. His first assignment was as an assistant pastor in St. Anthony Parish, Beaumont. He also taught Latin at St. Anthony School. In 1927, he was assigned to Sacred Heart Church, Houston.

He was named founding pastor of St. James on October 5, 1929, and under his leadership the parish grew from three hundred in 1929 to 1,150 by 1940. He served as chaplain of the Port Arthur Serra Club for twenty-four years and instrumental in bringing the first Serra Club convention to be held in the area to Port Arthur in 1955.

He was also president of the Port Arthur Rotary Club and was a member of the Knights of Columbus. He spoke before numerous civic clubs in the area on Communism, and led panel discussions in area schools. He once wrote a weekly editorial page column for the Port Arthur News.

The Fortieth anniversary of Monsignor Kirwin’s ordination to the priesthood was marked by a Solemn High Mass in 1961 celebrated by Bishop W. J. Nold of the Diocese of Galveston-Houston. Concelebrants were the first boy baptized in St. James Parish, Father William Pickard, and the first boy from the parish to be ordained, Father Marvin Hebert.

Also in 1961, Monsignor Kirwin was made post-honorary prelate by Pope John XXIII. The honor entitled him to wear the ring of a bishop and a pectoral cross.

The parish celebrated its fortieth anniversary in 1969. And Monsignor Kirwin was honored on his forty-eight year as a priest with a banquet. Among the many dignitaries attending were U.S. Congressman Jack Brooks and former Governor Allen Shivers.

Monsignor Kirwin died on October 3, 1971, and is interred in Groves’ Greenlawn Cemetery.

“All who knew him personally, or by reputation–regardless of faith–mourn the passing of one of Texas’ most distinguished clergymen, the Right Reverend James M. Kirwin, who so faithfully served his Church, his community and his country.

“Inducted into the priesthood half a century ago, he was the founding pastor of St. James Parish in the late 1920s and was its guiding spirit until his recent retirement.

“A kind and gentle figure, Monsignor Kirwin never hesitated to speak out firmly on non-sectarian issues affecting the public welfare.

“For a number of years, the News was pleaded to publish a Sunday column of his, which was mainly aimed at the threat of Communism to the world in general and the United States in particular. That same theme was carried out in numerous speeches, warning the people of the peril of the ever spreading Godless philosophy of the Soviet Union.

“The eloquent churchman was among the first voices in the nation to sound that alarm, particularly when Red emissaries began to infiltrate our government.

“Under his guidance and assisted by others, he developed the growth of St. James, which became so large that a number of new parishes were nurtured by it.

“Although his primary interest was his church, the Rt. Rev. Kirwin participated in numerous civic activities designed to improve the cultural and economic well-being of Port Arthur.

“His personal friends and admirers-Catholic and Protestants alike- ranged from the humblest citizenry to governors of Texas.

“So widespread was the affection and esteem which he earned that an appreciation dinner in his honor was held on the 40th anniversary of St. James, attended by hundreds.

“The stewardship and influence of this servant of God is indeed a loss which will be far-reaching.” 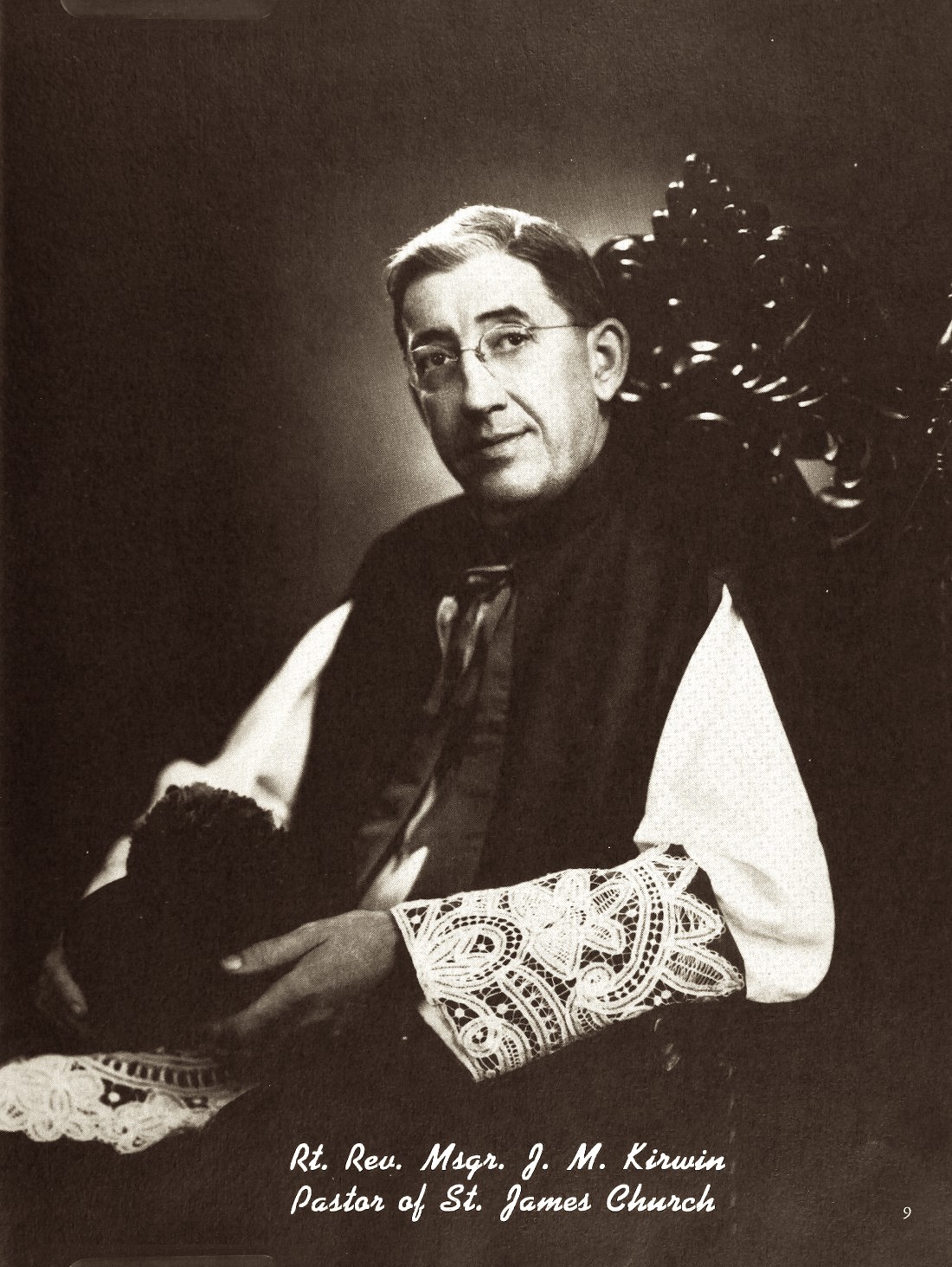