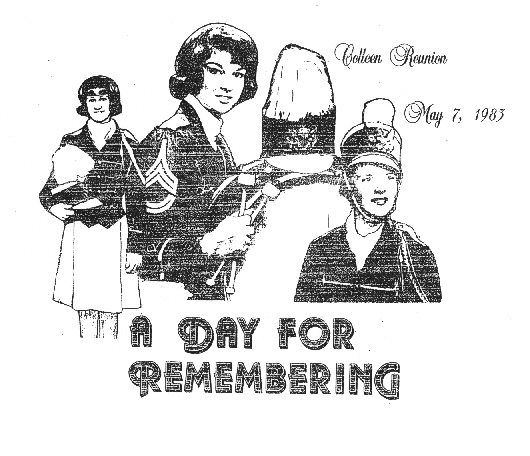 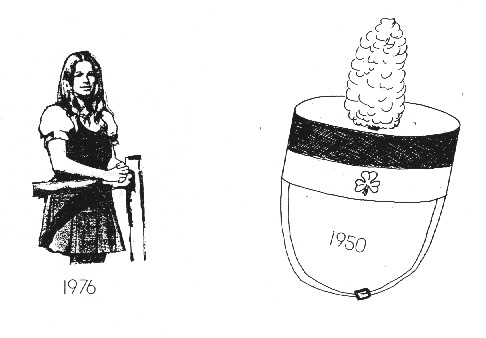 TRADITION — Noun. A belief, custom, narrative, etc. transmitted by word of mouth from age to age; religious doctrine preserved orally from generation to generation. From the Latin tradere, to hand over.

Bishop Byrne has one tradition that has touched many generations of women. From the Bells of St. Mary’s and the St. James Drum & Bugle Corps, there emerged a group of young women who were often admired by the Golden Triangle Area–the Bishop Byrne Colleens. The preservation of the Corps for all these years is based on tradition.

Many of the young women had no formal musical background. There have been instructors brought in to teach the fundamentals of drum cadences and basic music for the bells and bugles. Those Colleens from the 1950’s will remember Mr. Pineda & Mr. “C.” The best method, however, has remained the “traditional” one of handing down the knowledge from generation to generation.

The songs, drum cadences, marching styles and twirling routines have been handed from one class to the next. The musically trained Colleens would introduce new songs to the bugles and bells. The drums would invent new beats to add to the repertoire. But all former Colleens can remember such favorites as Legion Drummer, marching into the stadium to Here We Come, and leaving the field to the tune of Thunder.

The techniques employed to train those trying out for the corps may have seemed unusual to other musical organizations, but they have proven more than adequate for the Colleens. Many can recall scraps of paper stuffed into school books with such odd formulas as:

To the passer-by, this may seem an unusual series of numbers; but those girls practicing for tryouts knew it as the Sixth. It wasn’t always necessary to use a drum to practice. A pair of drumsticks and a Physical Science book would work quite well.

There is a great deal of pride associated with the Corps. A 1967 alumni recalls the desire to be a Colleen from the age of five, while watching her older sister perform. Years later, she would carry on the tradition, as she marched and played the same instrument. Sisters, and even daughters of Corp members have become Colleens.

It was more than parades, games, and pride of the uniform. It was hard work; challenging another girl for her position; and disappointments. Everyone remembers those early-morning August practices, and the constant orders to “cover down!” and “do …you …understand?!” Of course, there were the blisters received from one’s first parade. And one always had to beware of a Huzzar lurking in the bushes to get material for new routines!

The efforts were worth it, however. With excitement and anticipation, girls awaited their first march into the stadium as Colleens. And how much fun they had on the bus trips! There were many activities besides the games and parades. There were the Colleen-Huzzar Teas, the Mother-Daughter Teas, and the Colleen Ball.

The traditional military uniform has remained basically the same. The casual uniforms have changed several times through the years. Some years the girls wore green Colleen sweaters with black or white skirts on game day. Then there was the green pleated skirt with white shirt and cross tie. In the 70’s, the casual uniform resembled the outfit of an Irish Lass, with a green skirt, black weskit, and peasant blouse. The girls of today have kept this uniform and also returned to the Colleen sweaters as an addition to their wardrobe. The military uniform was modified slightly, with a change of hat, and an ascot about the neck instead of a bow tie. It is interesting to glance back through the yearbooks and see how the Corps has evolved into a lovely group of young women Port Arthur can recall with pride.