Former graduates of Bishop Byrne High School and Colleen Drum and Bugle Corps get together to practice for marching in the Port Arthur Mardi Gras parade Saturday in the St. Mary Outpatient Center weight room which is the old high school’s gymnasium.
Port Arthur News Staff Photo by Allen Pearson 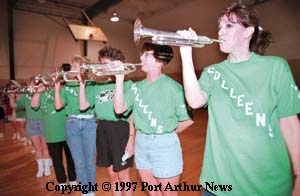 The Bishop Byrne Colleens are seeing green again and blowing bugles to prepare for the next Mardi Gras of Southeast Texas.

It started as a joke two years ago when Thomas Jefferson’s Red Hussars reunited. Gail Ortego Borel, from Byrne’s class of ’69, strung a Colleen record album cover around her neck and boldly marched through the parade lineup. Hussars encouraged her to round up her classmates for a parade march, too.

Betty Brownlee, who sent three children to the now-closed Bishop Byrne High School, said Borel started rounding up drill team members from her church, and Andy Andrus, the Colleen director from 1955 to 1967, asked Pat Hebert of the class of ’65 if she could round up enough instruments to see them through a parade.

Monica LeBlanc McDonald, the final Colleen director, produced an alumnae list and six weeks later there was money for half the needed instruments. An anonymous donor provided money for two bell lyres. Lois Badeaux, a past Byrne band president and a Colleen mom, found 44 copies of the Colleen album her husband, Floyd, recorded in April 1976. The album and audio tapes of it are being sold at weekly Saturday practices in the gym of the St. Mary Outpatient Center, formerly Bishop Byrne Regional Wellness Center, the building that used to be the high school.

A float will carry former Colleens who don’t wish to march, and Hebert said she’ll be on it with women from all over.

“You’d be surprised. We have some coming in from Austin and San Antonio and Temple,” she said.

A woman from New York will spend her vacation days at Mardi Gras; she’s opted for the float, Hebert said.

“It’s wonderful. Everybody’s having a ball. You just get to strike up old friendships. It’s hard work. Those women have put a lot of work into this,” Hebert said. “It’s growing every week.”

Now about 70 women are at weekly rehearsals. Several mother-daughter teams are planning to march. Beverly Vidrine, an original Colleen from the class of 1950 and her daughter Paula and daughters-in-law Kathy and Jill Vidrine say they’ll take up a whole row.

Gay Oberly was a member of the first marching Colleens in 1949 when Sarah Lang Steck began the group, Brownlee said. Her four daughters, Ginny, Gay Ellen, Kathy and Alice will march with their mother and their aunt, Alice Dumesnil.

Brownlee has organized a Colleen display that will be set up at the Port Arthur Public Library foyer through October.

Green and White Flows Down Procter 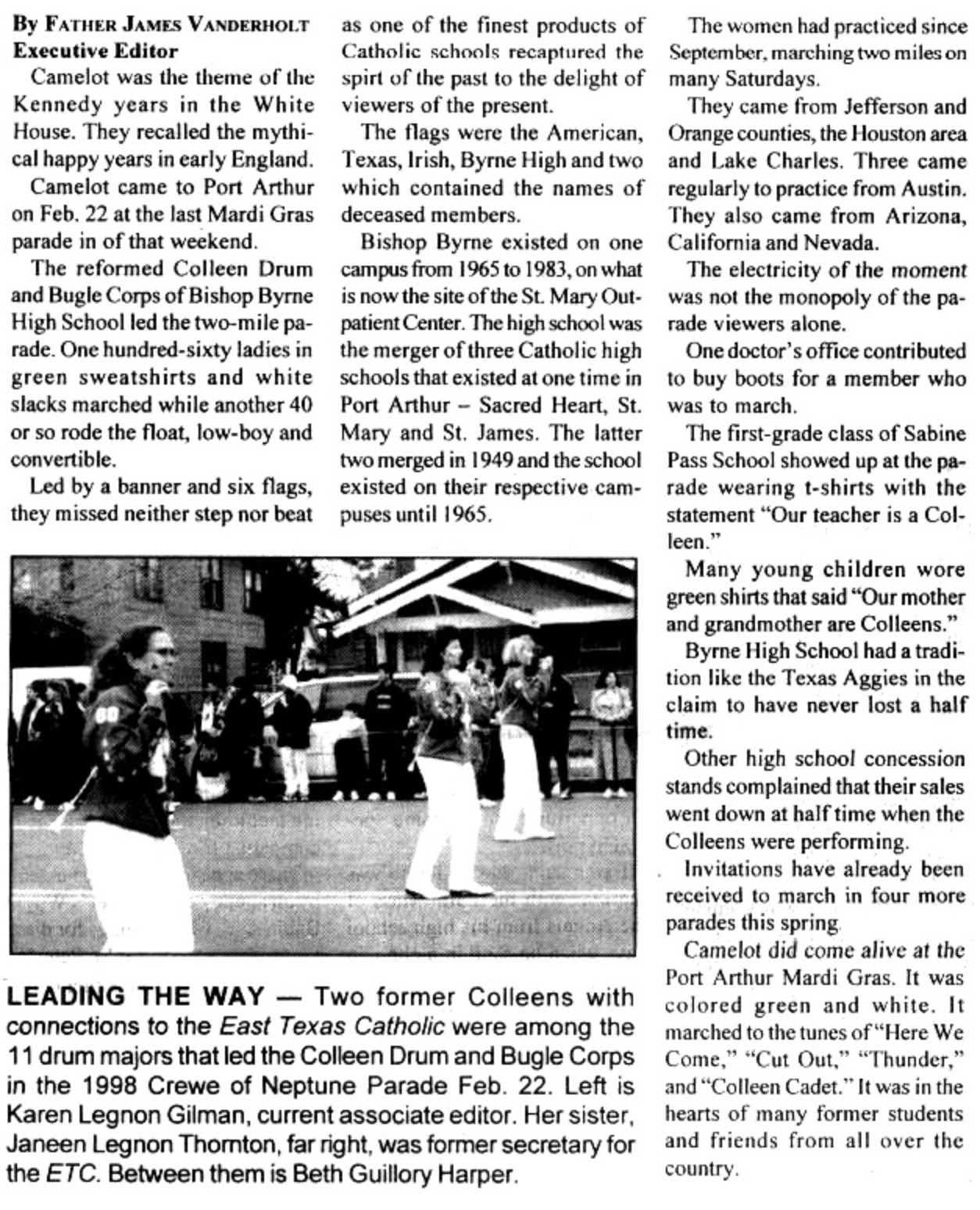